image Disappointment, Learning, Preparation & Triumph – is that the sequence? 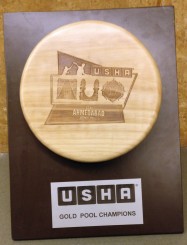 Just last month, my team, Jumbish played our first ever finals of an open Ultimate Frisbee Championship at SUO 2016. I documented my personal and our collective disappointment about playing the way we did and losing the finals in this post titled, Disappointments and Instinct – hand in glove! But you already know by now that disappointment has turned into triumph and it seems that we learned and prepared! But let me take you back a bit into where this journey started for me.

I had no inclination that this is where my sporting journey will take me when I started playing Ultimate Frisbee in December 2010. How I got to this point is already chronicled in the post, Why I play? The sport excited me, and because I wanted to play competitively, I started an Ultimate team with some staff members & friends in Surat in Dec 2011 and Surat played it’s first ever tournament at Ahmedabad Open Ultimate 2012 in January, 5 years back. And at that point, I can say for sure that there was no specific goal / ambition. But 2-3 years down the line, on the return journey from another AUO (perhaps AUO 2014), my team mates on Surat Trailblazers, after winning the Silver Pool Trophy said that they thought that my aim was to win a national championship and I guess I just agreed! And here we are today.

It was by no means a straight-forward journey. The team I started playing with, Surat Trailblazers lost steam around 2-3 years ago, with many players opting not to play, or not being regular enough for practice sessions. We especially had (and still have) difficulties in recruiting and keeping female players on the team. Being a mixed format tournament in India, it’s imperative to have females on the team, but to find adult females who are interested and their circumstances allow them is pretty darn hard, especially in a city like Surat where sports isn’t a priority for most!

But in 2013-14, a close friend of mine, Meeta Shah, who runs an NGO called Jumbish Educational Trust introduced the sport at the municipal school that the trust had adopted. Meeta herself played the game competitively for 2-3 years and that how’s the team Jumbish was born, consisting off, to start off with, a bunch of scrawny boys in grade 6 to 8. In fact, in 2013, we tried registering them AUO, but more as a last resort as we weren’t sure either and they just came to watch.  But they played some practice games and made an immediate impression on the audience due to their excellent disc skills and a quick give and go game. And later in 2014, Jumbish defeated Trailblazers in the Silver Pool Finals of Gheun Tak at Mumbai and they had become the top team in Surat and were still a long way to go!

That’s when some of the adults from Trailblazers decided to merge with Jumbish. And we haven’t looked back since then. We have been steadily climbing the charts and were 7th at BUO 2015, and then 5th at BUO 2016, finally, having notched up wins against many top teams. And after the debacle that SUO 2016 Finals was, here we were again playing the finals at AUO 2017, the first tournament of the newly instituted UPAI tour.

We rose to the occasion, both literally and figuratively. We learnt from our impulsiveness at SUO, and curbed our instinct to throw long without a care in the world. In fact, we trained hard for this over the last month, 4 times a week and showed admirable restraint in matches leading up to the finals as well. Our decisions were better, we valued possession a lot more and resulting in minimal throwaways. We made fewer mistakes and converted quite often.

In fact, I realized post this tournament, that probably sports, beyond a level, is about mistakes or rather avoiding them while taking your best shots. Of course, sports is by design meant to encourage mistakes; imagine seeing any top-level game in which no team makes a mistake, even though the quality of the game is very high. So mistakes are built-into the DNA of sports and those players or teams that can minimize them while playing boldly are probably the ones on top!

And as I said we also rose literally to the occasion – our boys especially are athletic, and we used that to our advantage both horizontally (out-running them), and vertically (out-jumping them for the disc)! But importantly we also played our girl players effectively in the finals which was Jet Lag Squad’s biggest strength and our biggest weakness leading to the finals. 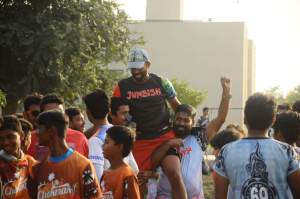 It was an emotional high when Reena, who was also awarded the Most Valuable Player (MVP) female, fittingly caught the disc in the end zone assisted by the male MVP Krishna, who had a fantastic match (as against a very poor SUO finals). At least 100 people, if not more, got on to the field to congratulate Jumbish from a crowd that was more than 300 people. And when Mitesh and Pratik lifted me on their shoulders, I had tears in my eyes and I felt happy and proud.

It’s still not sunk in, it was surprising. When asked before AUO, what our aim was, I had said that our focus is to be in top 4 and our dream is top 2! I don’t think I would have told anyone that we want to win the tourney! And we met that challenge. In fact, inside I am feeling like the vivacious character of Dash from the movie, The Incredibles, who runs so fast that when for the first time he steps on water, he realizes that he is so fast that he can actually run on water. I am feeling a little like that. We have been telling ourselves that we are capable of the big league and suddenly we are there. It feels so good you know!

On reflection, I think it helped that we lost the SUO final which we were expecting to win. It made us reflect, it made us question our natural game, it told us that winning a final won’t be easy. It was a bitter but a momentous learning experience. It helped us all to focus and not get overconfident. It ensured that in every practice we kept telling ourselves what we need to do.

I think it also helped that we played against a non-Indian team, which meant that it wasn’t a team that we knew well, and more importantly as it was a team that had been till the finals, killing the competition, we were the obvious underdogs, and no one would’ve criticized us if went down fighting.  We too had lost of them in a crossover match 8-12. It was perhaps a blessing in disguise for us that we could learn from that match and especially work on our weakness of not utilizing our girl players optimally.

Once we got 3 points in a row against them right at the start, it put them under a lot of pressure, leading to some errors from their side apart from our excellent play itself. THe team also told us later in the spirit circle that they weren’t mentally prepared as they’re weren’t expecting us to come out so hard at them.

Personally, I didn’t play much of the finals due to thumb injury that I incurred during the semis (which I did well in and before that as well) and I also felt the finals nerves – suddenly I felt that I won’t be able to cut or throw the disc well (and I also made 2 such mistakes). But thankfully our team, whose average age is around 16, was doing well enough. Our young players had stepped up, especially the stars in our team. So, in the finals, I focused on strategy and keeping everyone cool; together with Hardik and Box, we made good strategic calls, line-ups and plays. We unleashed Krishna, Kamlesh, Shubham, Sagar, Rrutvik and the girls on JLS, who didn’t know what hit them!

Jumbish, and in general Surat teams, have almost zero outside players, i.e. players who’ve trained outside of Surat. I am extremely proud of this completely home-grown youth team! In 4 years, we’ve gone from a being a bunch of scrawny youth to being the top team in AUO 2017 (7 years for me). It’s both a culmination and a beginning for us!

Keeping our heads on the ground is now going to be a challenge for us, especially for the boys and girls, or maybe not just for them (maybe for me as well judging from what I’ve written). The other teams have seen us, they will be prepared. We are no more the underdogs. We are going to be challenged. Have we discovered the magic? I guess, we’ll find out. Here’s to an year of ultimate Ultimate then! 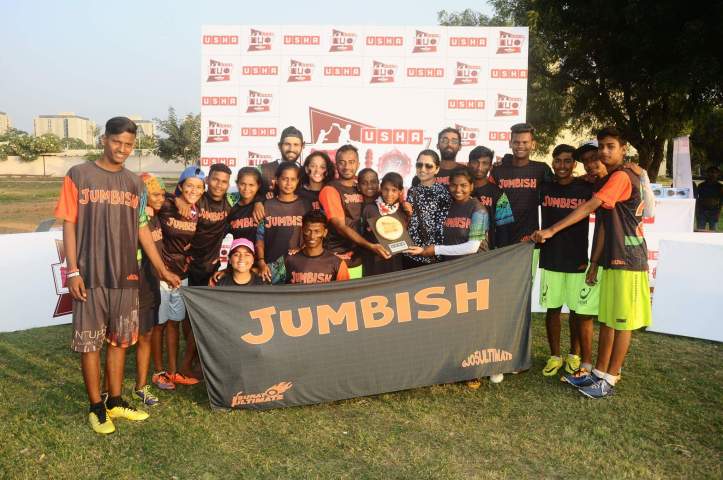