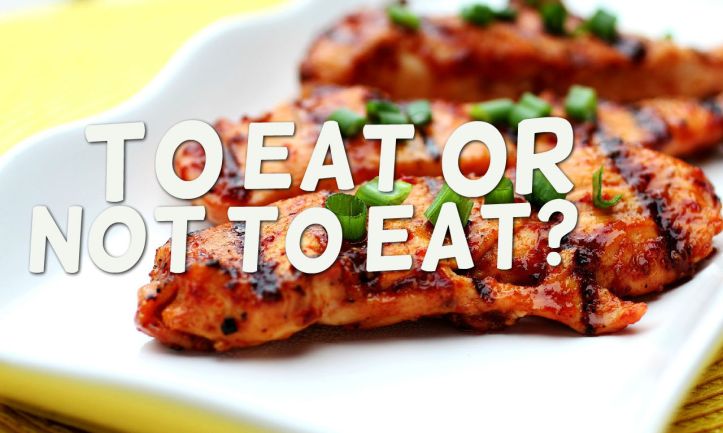 Having been born into a family that eats only vegetarian (veg) food, and has not been consistent with their views on eggs, I grew up to be a vegetarian. I don’t remember having thoughts of trying out non-vegetarian food although it wasn’t as if we weren’t exposed to non-vegetarian (non-veg) food. We lived in Nigeria for 2-3 years, where our first experience was a flight in which we were served fish when we asked for veg food, because, of course, fish is vegetarian. Incidentally, while this first incident was in 1988, even as recently as May 2017, when I was in London with family, we were asked the same question – when we told our servers that we are vegetarian, “Fish is fine, right?”

The point is that despite the exposure during childhood, it was only when I was in college that I entertained thoughts of eating non-veg food. And that too primarily because I was really fed up of eating the mess food. I still remember that we were served chole-puri on Tuesdays and Wednesdays was when non-veg eaters would get chicken. Not only was the menu repetitive, but it was also not very tasty (no idea if it was nutritious or not). So there came a day in my 3rd year when hostel-mess-food-fatigue combined with post-major-event-boredom (I was really busy organizing Techfest after which there was suddenly a major vacuum), I went to eat out with 3 of my friends, who asked me to try out a chicken dish. And I said, “Sure – why not?”

And I liked the taste. And then I ate chicken when I could. But I didn’t stick to chicken only. I ate seafood, although I didn’t like the taste of most of it. I tried mutton, and even that meat that must not be mentioned by name and liked them to some extent. As far as I was concerned, it doesn’t matter which animal the meat came from, not having any cultural or religious baggage in this matter.

However, cooking at home was something I didn’t try, both because it seemed too much of an adventure, but also because it brought frowns from my wife, who didn’t like the smell when I ate at home (but who otherwise didn’t have any problems with my eating non-veg food even though she is a vegetarian). But I ate when I could for the next 10 years. I believe I last ate non-veg food in Ramzan 2009 (or maybe 2010), when I was invited to a Ramzan party by a school colleague. I has already stopped eating by then, but I hadn’t announced it publicly, and therefore I ate that day. But after that day, I haven’t yet eaten and it’s been 7-8 years since then (as on date).

What happened is that in the years leading to 2010, I had been seeing this small truck carrying chicken really packed into small spaces. And it was a sight that didn’t appeal to me. 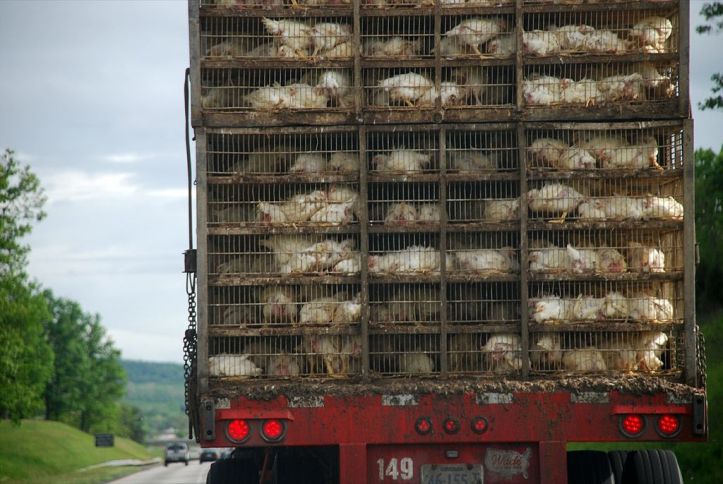 A typical truck carrying chicken (Source: Wikimedia Commons); the one I saw was far more packed from what I remember.

I had known that there are issues about how animals are treated. But seeing this a few times made me start thinking about the issue far more strongly. And then there have been many reports in the media about mistreatment of chicken in the Indian media.

I haven’t yet talked about what my parents and extended family thought about my switch to eating non-veg food. In brief, they weren’t happy.  They had strong religious/cultural beliefs and my mom would especially take every opportunity to talk me out of eating non-veg food. But I am nothing if not stubborn when it comes to what I believe in. I didn’t find eating non-veg food a religious issue (considering I am an atheist) and nor did I find it a cultural issue (I can barely say that I belong to a particular culture).

But the grounds of animals being living being was somewhat of a moral issue for me. I had argued vociferously that the distinction between plants and animals is primarily mobility and sound, otherwise they are both living, and both are non-sentient. So why distinguish? However, at the back of my mind, I couldn’t fully defend that argument, not from an intellectual viewpoint but from an “emotional response” viewpoint. My defense was primarily born out of the fact that I liked eating non-veg food.

But the animal cruelty issue, especially how they’re treated and then finally killed was an issue that I hadn’t faced up to fully. When I started doing that, I realized that it wasn’t something that I could make peace with. In fact, my strongest influence came from fiction. Christopher Paolini’s Eragon series, sees the eponymously named lead character transform into a wizard who has the ability to feel the minds of animals, even if it’s to use the energy from their bodies to power his magic, but in the process extinguishing the lights (non-euphemistically, killing them). Now, this requires us to use our imagination, but it’s not impossible to imagine that within each animal, there’s a driving force, a fire that drives their instinct to live. And I started feeling that the justification that we rear these animals specifically for the purpose of eating them may also not be sufficient justification to kill them.

And especially when I imagine killing them by own hand, I find even the hypothetical act hard to digest. When meat is served as processed meat or as cooked meat, you don’t really have to think about how that came to be. I would imagine that many of those who eat non-veg food would find killing an animal for their own meat a rather abominable one, at least the first kill!

I have often been asked this question about by friends and family as to why I stopped eating meat after so many years of eating it. And somehow I have always been slightly embarrassed about answers this question, and I end up giving evasive answers. I realized that the main reason for my discomfort is that I don’t want to seem like someone taking a higher ground, or sound like someone who’s preaching, especially after my own history of eating and liking non-veg food!

So here’s my answer now:

I guess my upbringing did have to do with this change in sentiment. I would conjecture that such a change in sentiment is less likely to occur in individuals who have grown up eating non-veg all their lives and their cultures/religions are also aligned. There’s seems to be a growing trend away from meat, perhaps more so in the western world, which is otherwise largely dominated by “non-vegetarians”. However, in general, large swathes of the world population are still meat eaters due to cultural, religious, geographical or other reasons (the figures seem like 1-10% vegetarians for the most populated countries). In fact, even the Indian statistics show that only about 30% of Indians are vegetarian and only about 21% families are purely vegetarian.¹

One thing that I find difficult to reconcile is the love and affection that the world shows for fictional animal characters and on the other hand the massive butchering that happens of a range of animals. Some of the most popular children’s characters in print and media are animals; some of those are eaten (pigs, cows, birds – or well at least a bunch of birds like chickens, turkeys, emus) and some of which are not eaten (dogs, cats, mice, or at least not eaten widely). I don’t know how the love for Peppa Pig, Ferdinand the bull, Chicken Little goes along with rearing them for meat. Funny if you think about how animals are “used” and “loved” through books and stories, and then are butchered, and made into sausages, nuggets and steaks.

Lest the above sound like preaching, let me mention that I am liberal in this matter. To each his own as far as whether you should be eating non-veg or not. Or also for that matter, what kind of meat you should be eating. Dipankar Gupta in a recent editorial in the Times of India says that while to some liberals the strong sentiment against eating “cow-beef” in India seems hypocrisy, but similarly in the western world dog and cat meat is abhorred, which may not be the case, at least for dogs, in some eastern parts of the world. He says that it doesn’t matter whether your sentiments are religious or cultural, but if it’s majoritarian sentiment then it might just be easier to go by it, and the government, especially local ones, can ban some “meats”.

While I don’t completely subscribe to this viewpoint, there’s some solidity in the argument here, especially when you compare with the sentiments for some other animals in the rest of the world. This tangent aside, reaffirming my view on the whole “non-veg” eating business, I say, “You should eat what you want to eat as long as you are comfortable with it”. Of course, I would suggest that you go and see how the animals that you eat are reared and killed, but then that just me speaking. You don’t have to do it. I will be happy to let my kids eat if they wish to – obviously, I will share my viewpoint (as will my wife) – but as long as they make an informed (or possible even an uninformed choice), I wouldn’t have an iota of an issue.

In fact, I still eat eggs (and really like them) and a lot of “vegetarians” consider that as meat as well. And I for one haven’t forgotten the taste for meat completely. The smells and the sights are still alluring. I had (or have) promised myself that I would eat meat at least when I go visit Europe because the exquisite sounding French cuisine is so much based on it. But I have traveled twice to the UK in the last 2 years, and I haven’t yet been tempted to change my value on this. Perhaps, I am now waiting for lab-grown meat to become commercially viable and culturally acceptable for me to start eating meat again – only this time, there won’t be any killing and no animal cruelty either, other than the use of stem cells from the animals to grow the meat.

What’s the moral of the story? None, except that you’ve got to do your own thinking and decision-making.